« Back to Race Around The Netherlands feed

Day -1 - The calm before the storm

Registration and bike check normally happens the day before the race, or for races with a late evening start, during the day of the start. The registration process usually includes a check of the riders bike, a handing over of signed rider agreements, along with proof of insurance. The rider is then given their cap, and tracker. They are now ready to race.

So what do we look for during the bike check? The mechanics doing the bike check are usually volunteers, often professional bike mechanics, or very knowledgable amateurs. There is a check list for each bike, but it's simple stuff, are the handle bars properly tightened? Do the brakes work? Are the wheels installed properly. This all sounds pretty obvious, but for many races the riders have flown with their bikes boxed up, and assembled them at the start. So checking they tightened their stem properly, and that they did their wheel quick releases up is an important check. Checking bikes yesterday I had riders who got sent away on both counts to just tighten their stem, or double check their wheels.

The other major thing we check is the reflectives. Following the hell year for ultracycling that was 2017, many races introduced rules regarding additional reflective material added to the bike. For RatN this is reflective tape on the forks, cranks, seat stays, wheels, and helmet. In bike check we make sure this tape is applied, and that there is enough of it. Some riders embrace the opportunity to make their bike look pretty and do a rather artistic job of the reflective tape. This year Ties Alfrink (Cap 120) stood out with reflectives on his bike. Am I allowed to award him the Dotwatcher prettiest reflective tape award? 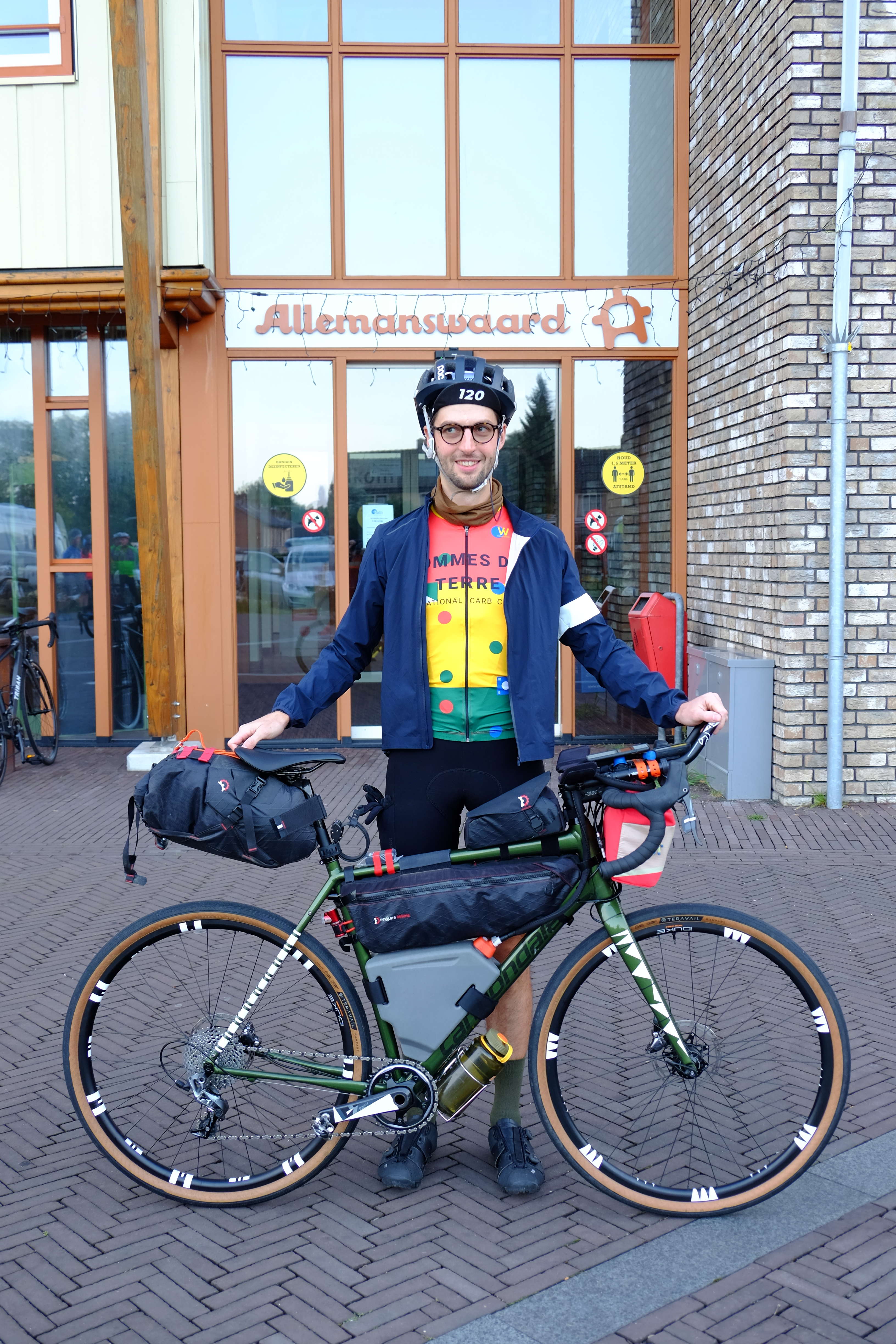 For others they apply the tape, knowing they are going to remove it as soon as the race is over. Then there is the final group, who get to bike check and haven't put any tape on their bike at all. I had one rider yesterday who I had to send away to actually put the tape on their bike before I would sign them off. The rider was Bas Vlaskamp (cap 1). Bas gets the You Really Should Know Better award here...

Registration is also a great chance to take a photo of riders with their bikes, before they have hit the road, while they're all still clean. For many it's a simple pose with their bike. 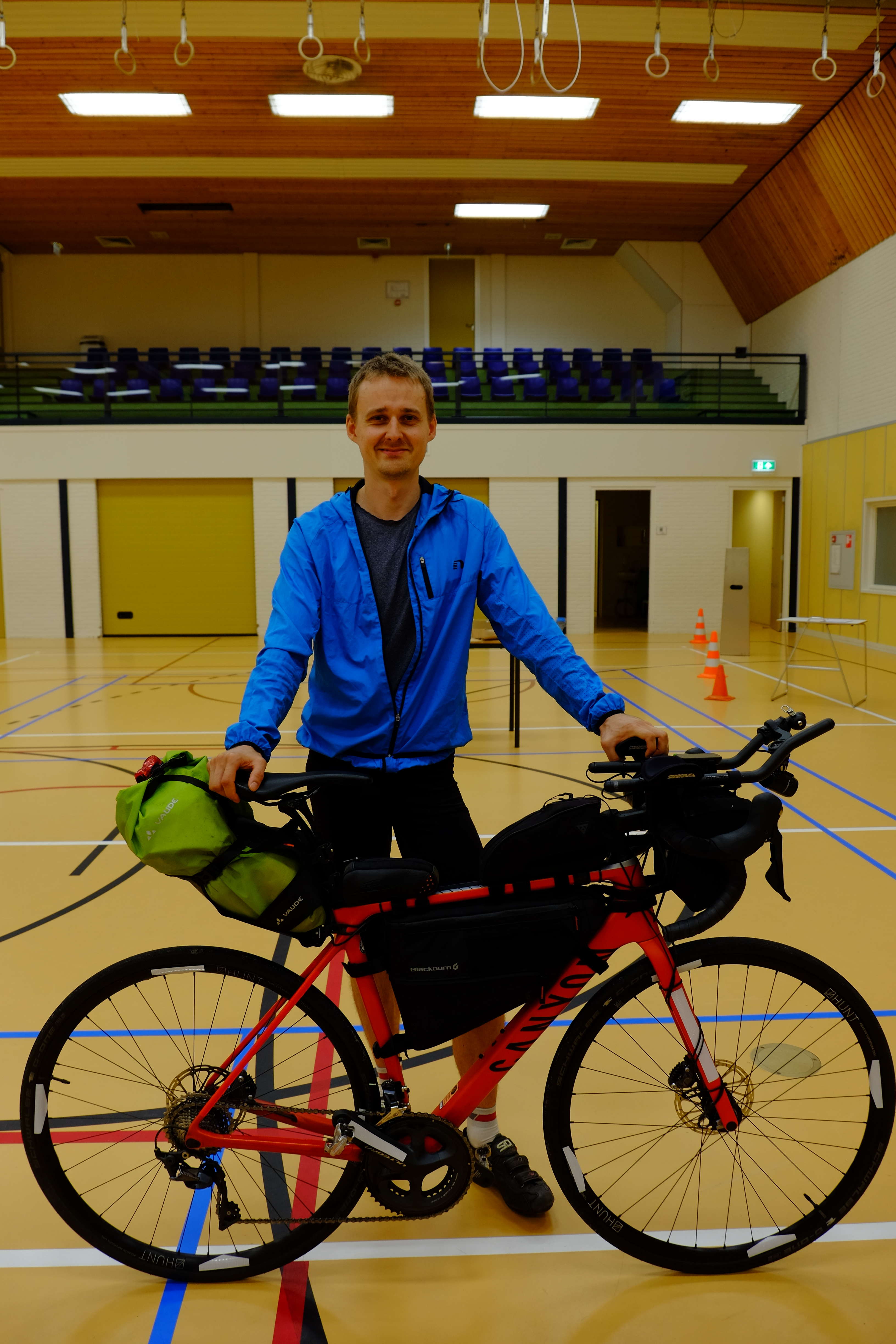 For others it's a chance to let their personality shine through... 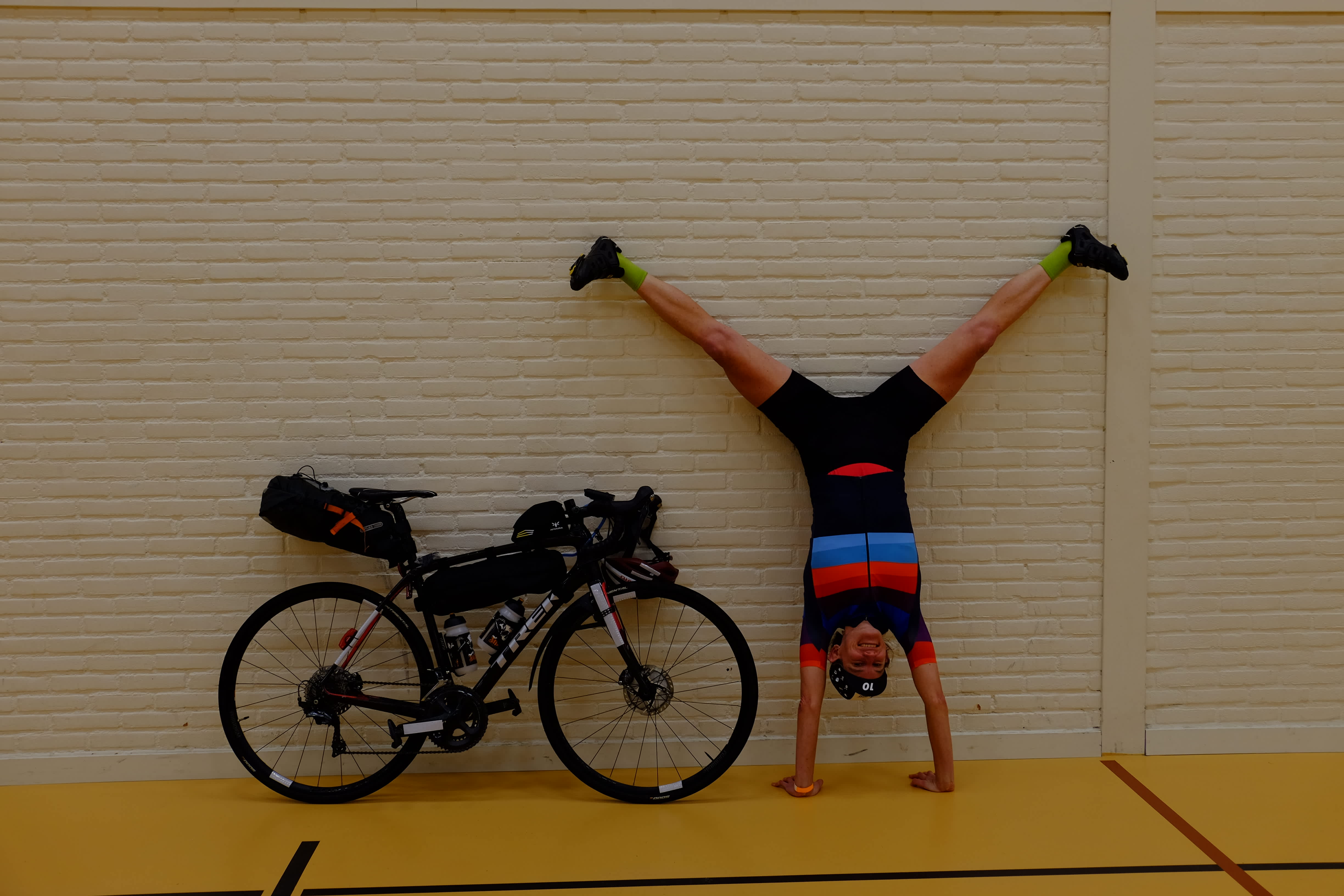 With your bike checked, paperwork sorted, photos posed for, there's not much left to do than chat to other riders, catch up with old friends, and ogle the other riders bikes.

If I had, it would have included: 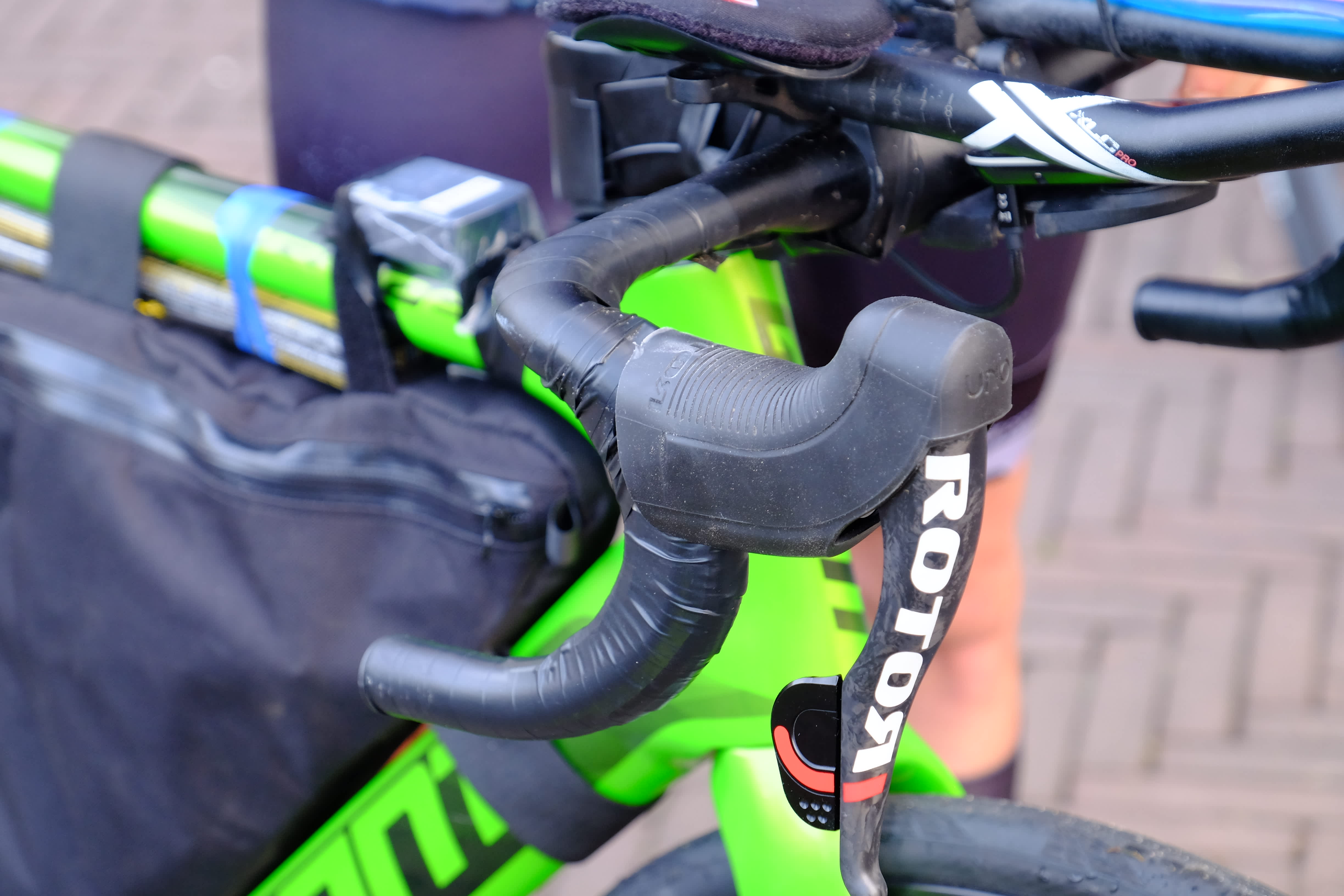 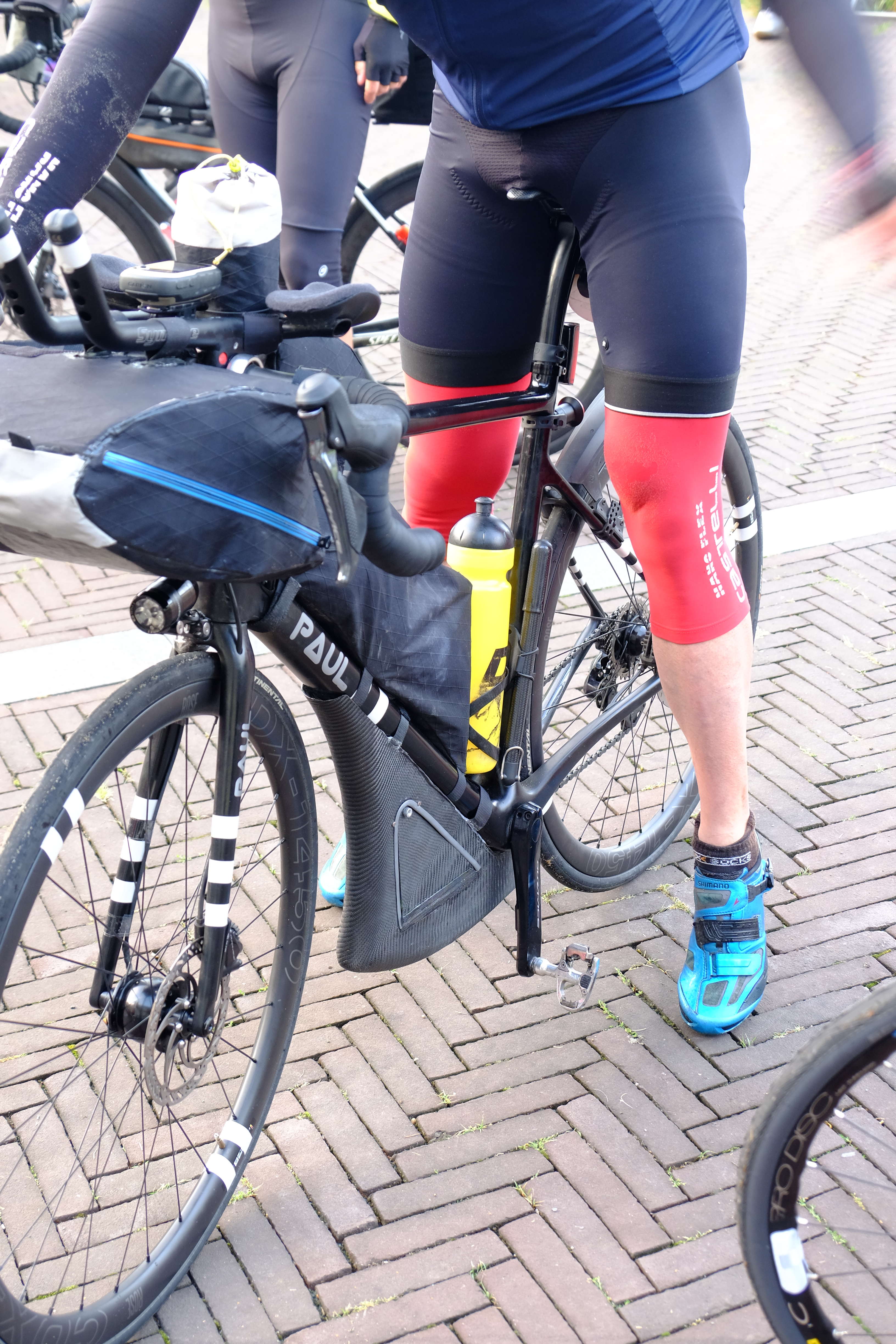 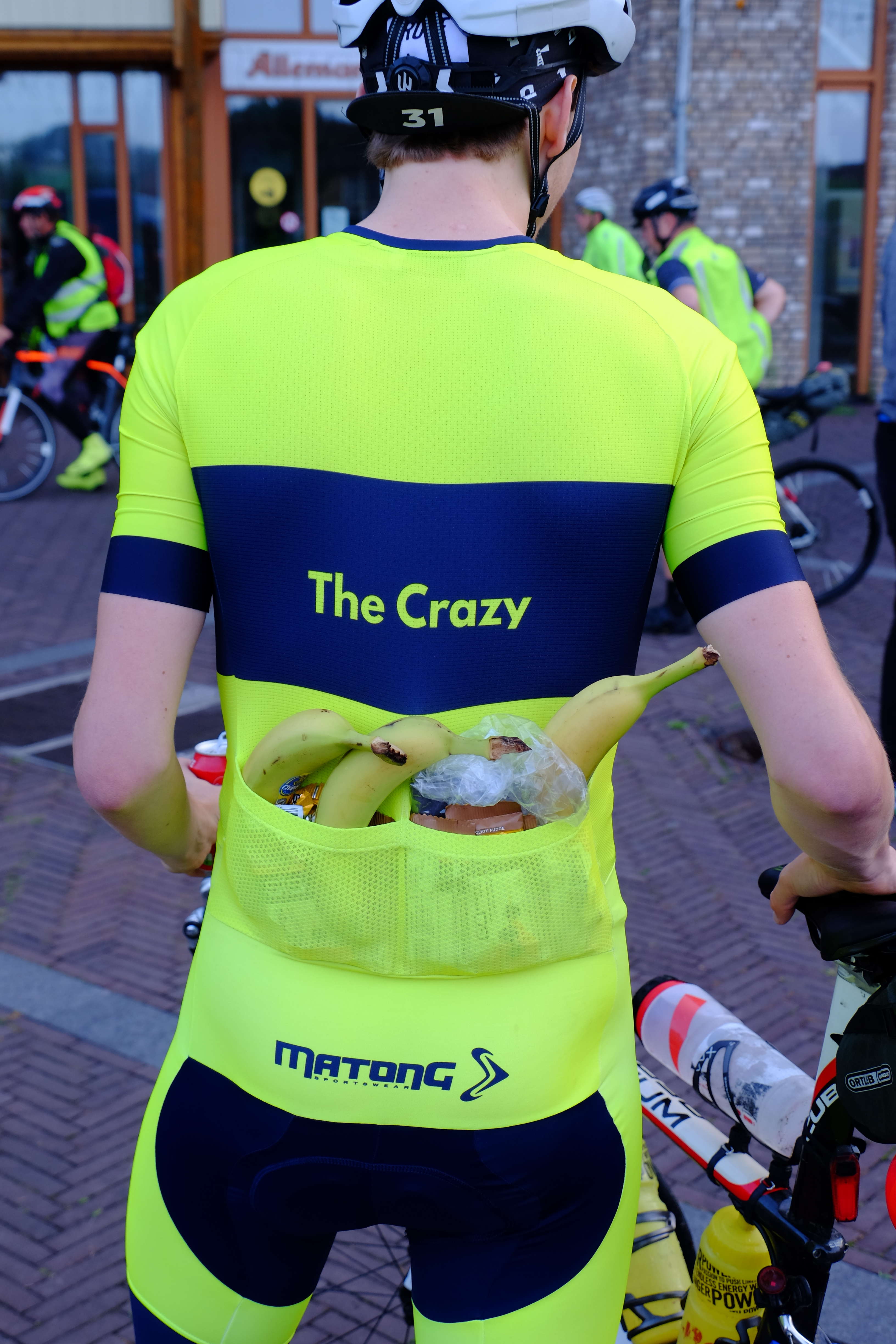 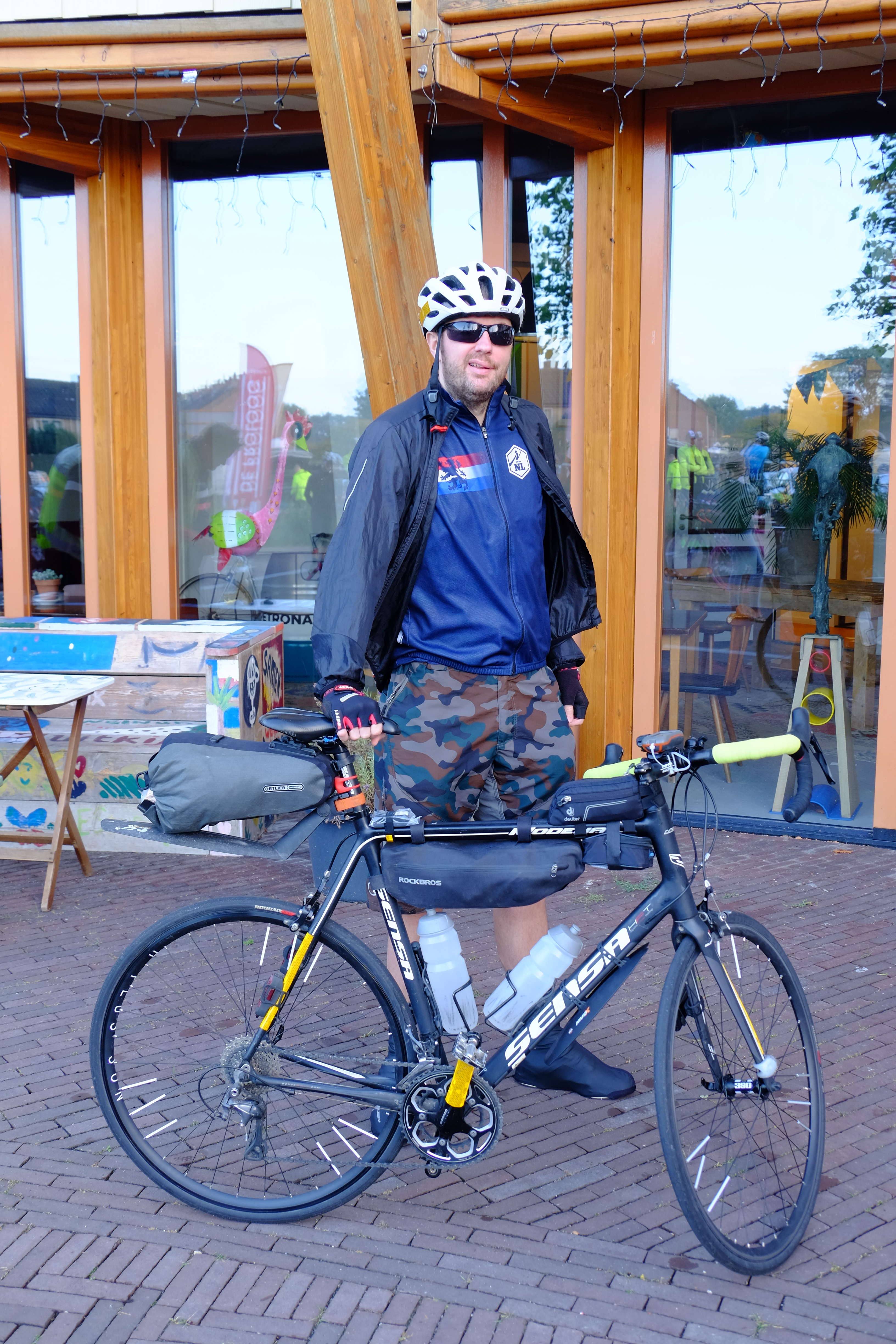 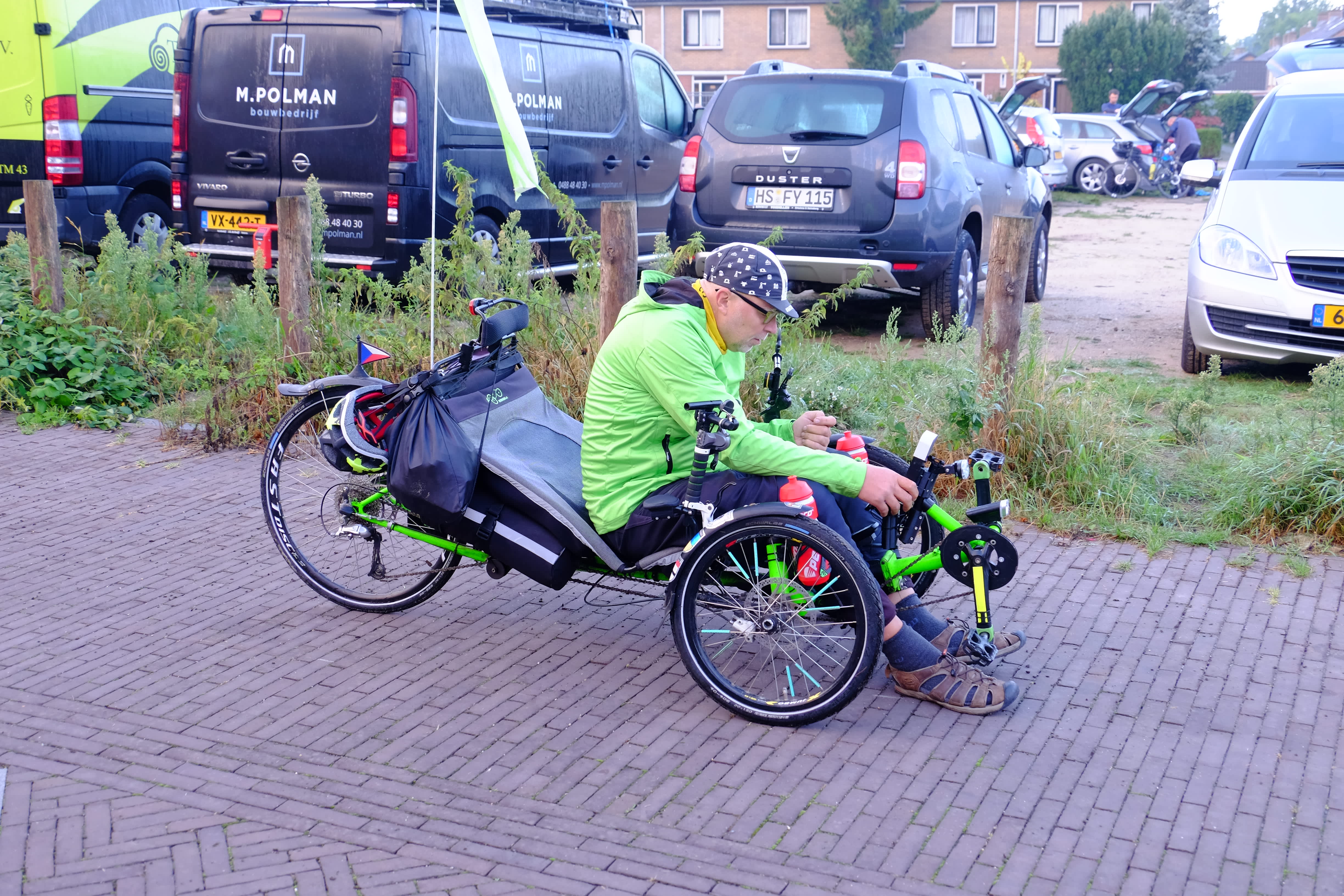 Other suggestions for what should be on the ultraracing bike bingo cards, please let us know on twitter.

Breakfast sorted, last minute toilet stops complete, there's just time for a few more photos of the riders before the off. 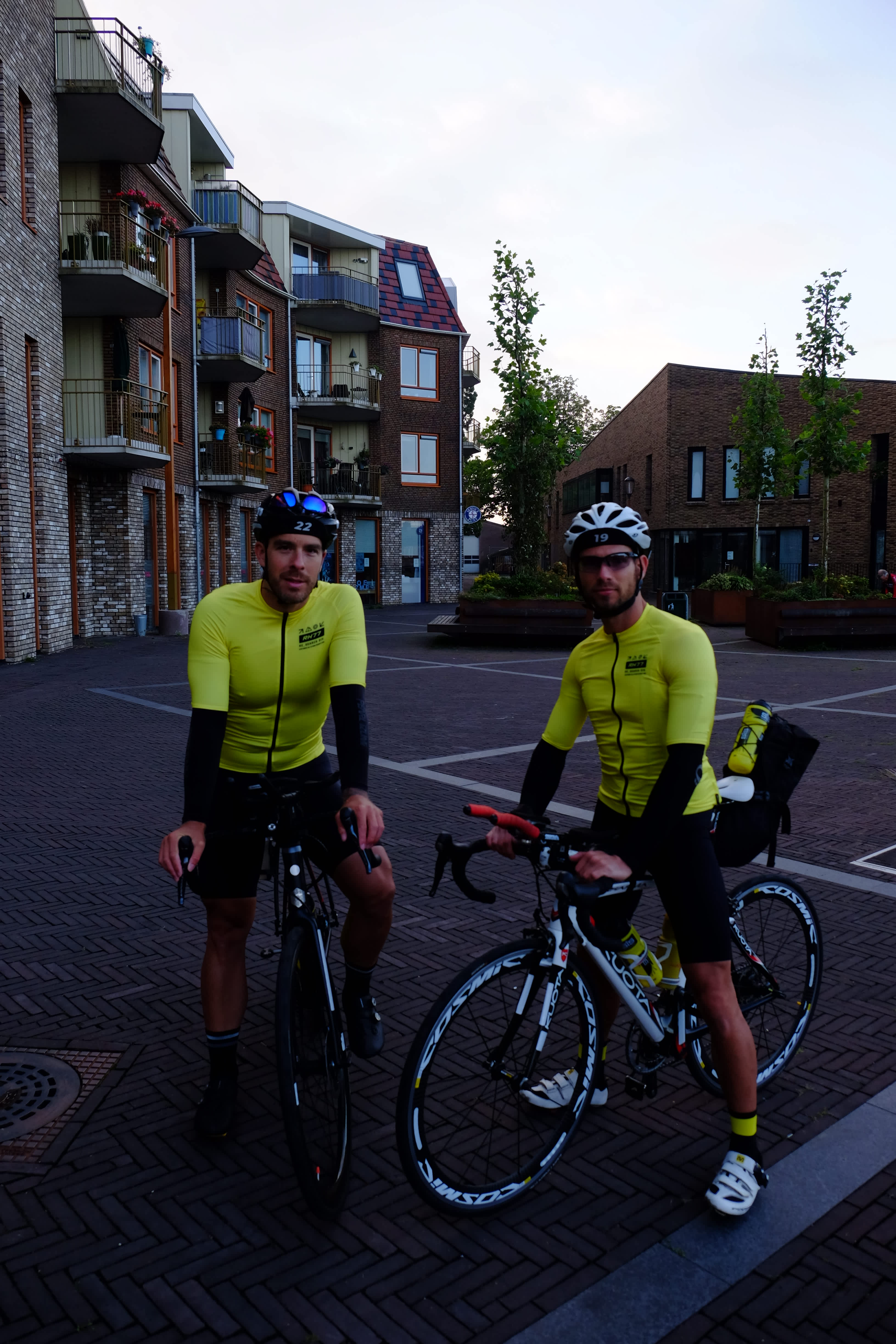 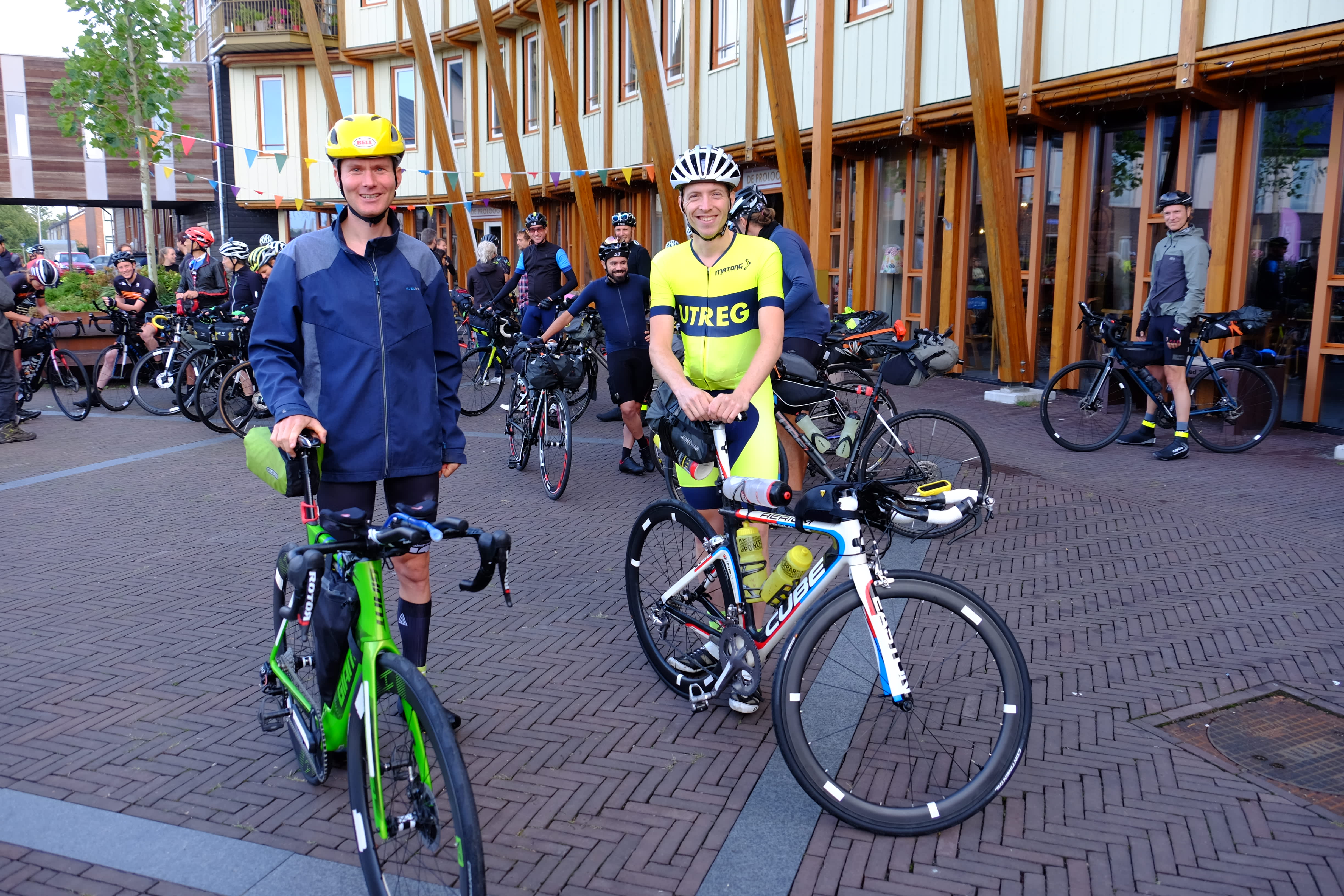 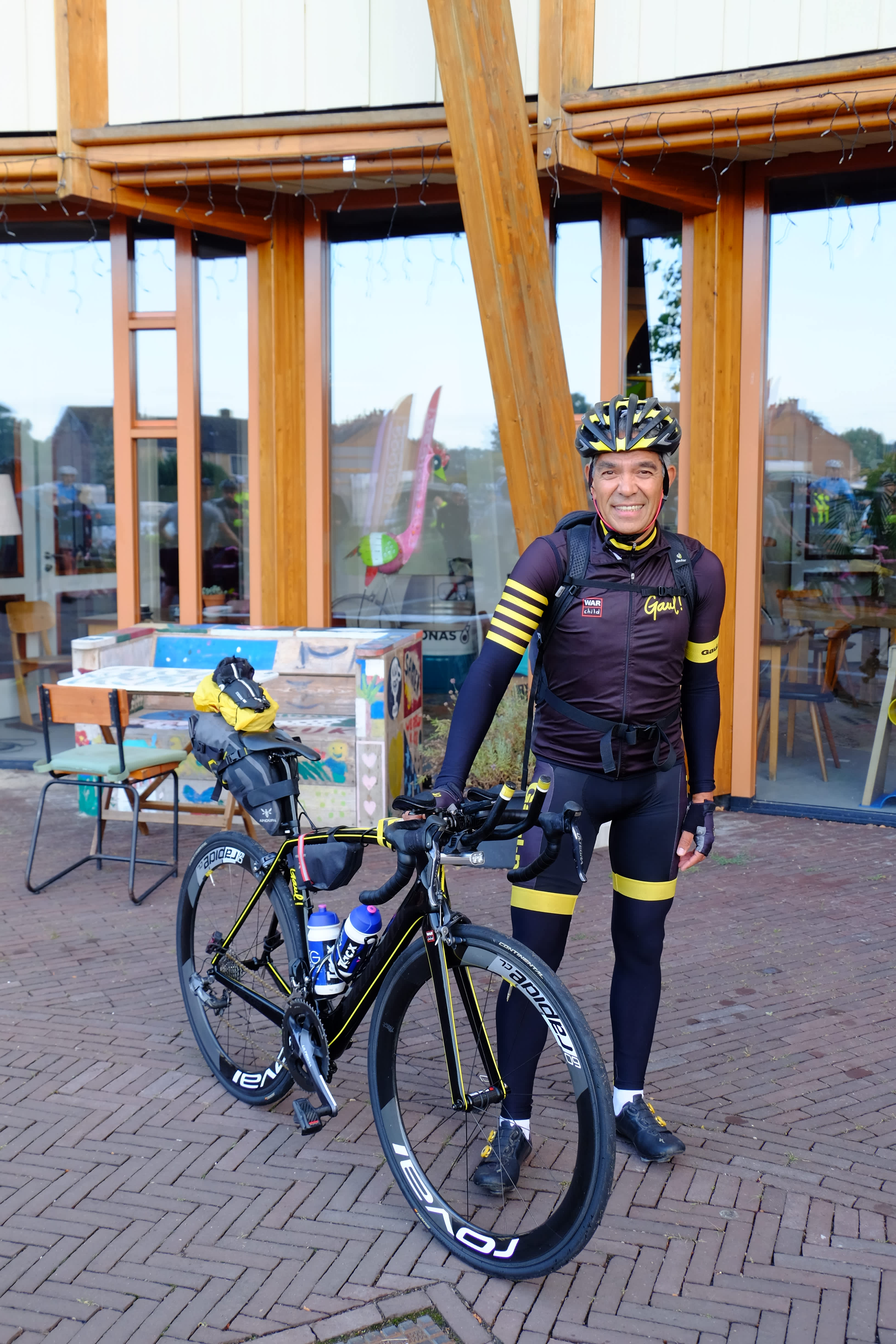 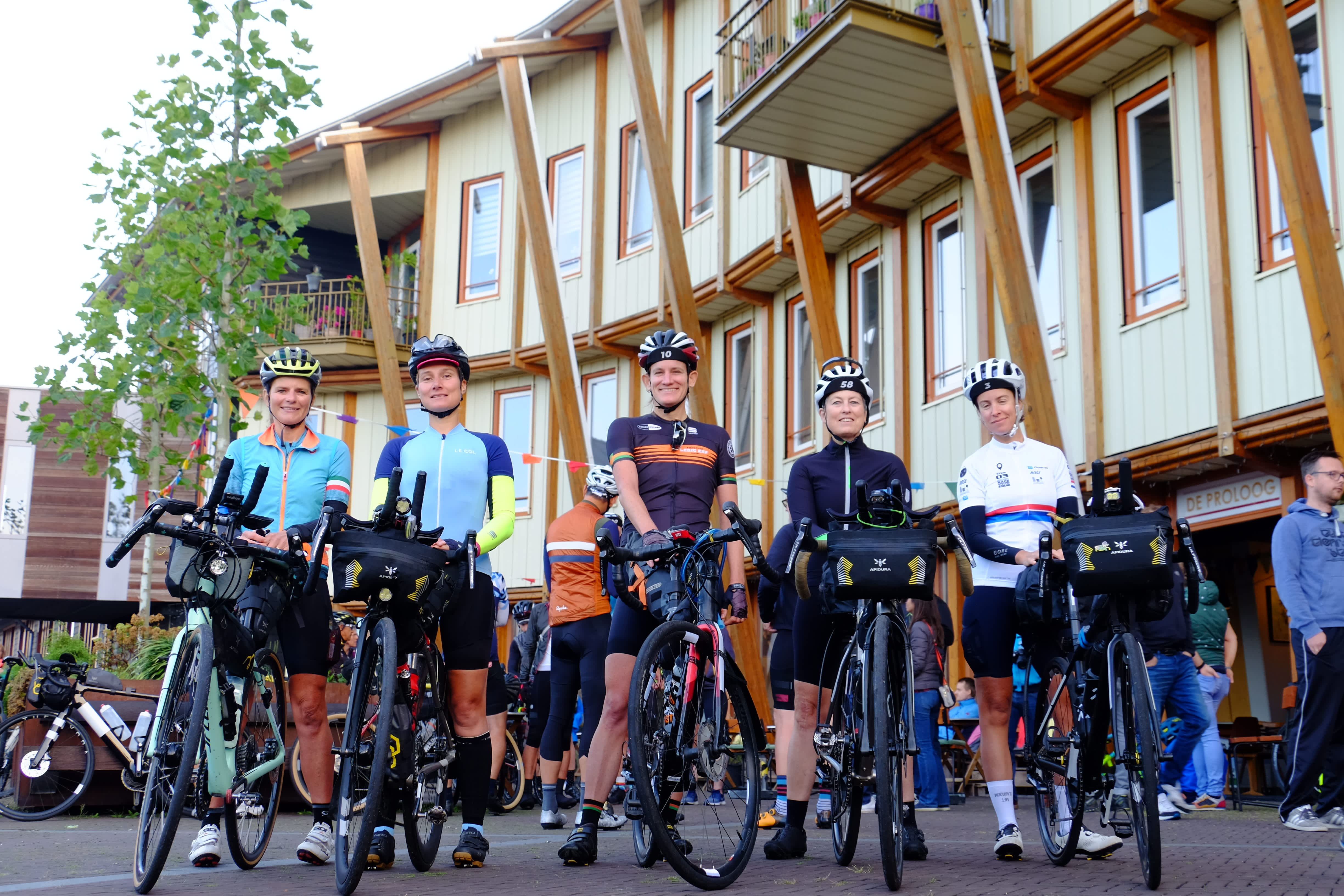 This should give you some idea of what happens in the hours before the race starts, as well as some nice bikes to drool over. Tomorrow morning I'll give you a proper update on the first 24 hours of racing.

In my race preview I mentioned the option of taking a longer route around the Hoge Veluwe national park. This appears to have been a misunderstanding and a change between when I rode the race, and the very latest edition of the race manual. The manual only mentions it as a detour if you're misfortunate enough to arrive at the park after 2000. However I did notice a couple of dots taking the detour in day light. I hope that wasn't based on my misinformation. I don't know if there will be any penalty.

In the original version of the preview as published, I misspelled "IJsselmeer" as "Ijselmeer". A kind Dutch person emailed me to point this mistake out. IJ is a single character in Dutch, specifically it's Ĳ, which is hard to type on most keyboards, so typically is typed as an I and a J. This means the correct capitalisation is IJ, not Ij. I have corrected the original article. Het spijt me.